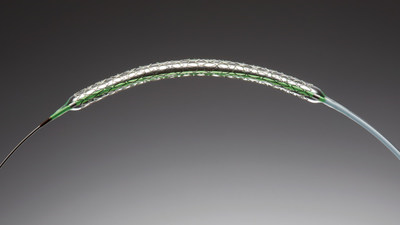 The PIONEER III study enrolled 1,629 patients (randomized 2:1 experimental to control) from North America, Europe and Japan and had a primary composite endpoint of target lesion failure (TLF) at one-year. The TLF outcomes showed that the HT Supreme met the non-inferiority endpoint at 5.4% compared to 5.1% from the DP DES (p=0.002). A grouped analysis of secondary endpoints showed a numerically better result for HT Supreme in cardiac death or target-vessel myocardial infarction (TV MI) with 3.5% in the HT Supreme arm compared to 4.6% in the control arm (p=0.27). Lower late stent thrombosis data (HT Supreme 0.1% compared to DP DES 0.4%, p=0.22) also suggested exceptional safety for the HT DES. A powered, landmark TLF analysis evaluating the healing superiority of HT Supreme between 1 and 5 years is ongoing.

“I am very pleased that Japanese patients will benefit from the most advanced DES in the US, Europe and Japan,” said Shigeru Saito, MD, Shonan Kamakura General, Japan and primary investigator of the Japanese cohort of the PIONEER III study . “The results combined with the safety measurement of cardiac death, target vessel MI and late stent thrombosis favor the HT Supreme, supporting the early endothelial healing concept.”

Contemporary DES have emphasized delay healing through prolonged drug delivery to suppress the body’s response to injury, hypersensitivity, or progression of disease. The HT Supreme development was based on the “wound-healing window” concept originally proposed in 2013 and represents a novel class of DES that highlight the importance of early, timely healing. Through patented designs and proprietary processes, the HT Supreme was tailored to help patients accelerate their wound-healing process and restore their natural endothelial function. This healing-targeted mechanism may help overcome the long-standing problem of tradition-DES implantation, allowing for safer long-term results.

“We are very grateful to the extraordinary group of medical professionals and all the patients who have endured through this difficult pandemic and completed this study milestone in such a timely and professional manor,” said Jianhua Sun, PhD., Chairman & Chief Executive Officer of SINOMED. “The results have been extremely encouraging and if we reach superiority in the landmark analysis, we could revolutionize the understanding of healing and the future of implantable devices,”

More information on the PIONEER III study is available at www.clinicaltrials.gov, identifier: NCT03168776.