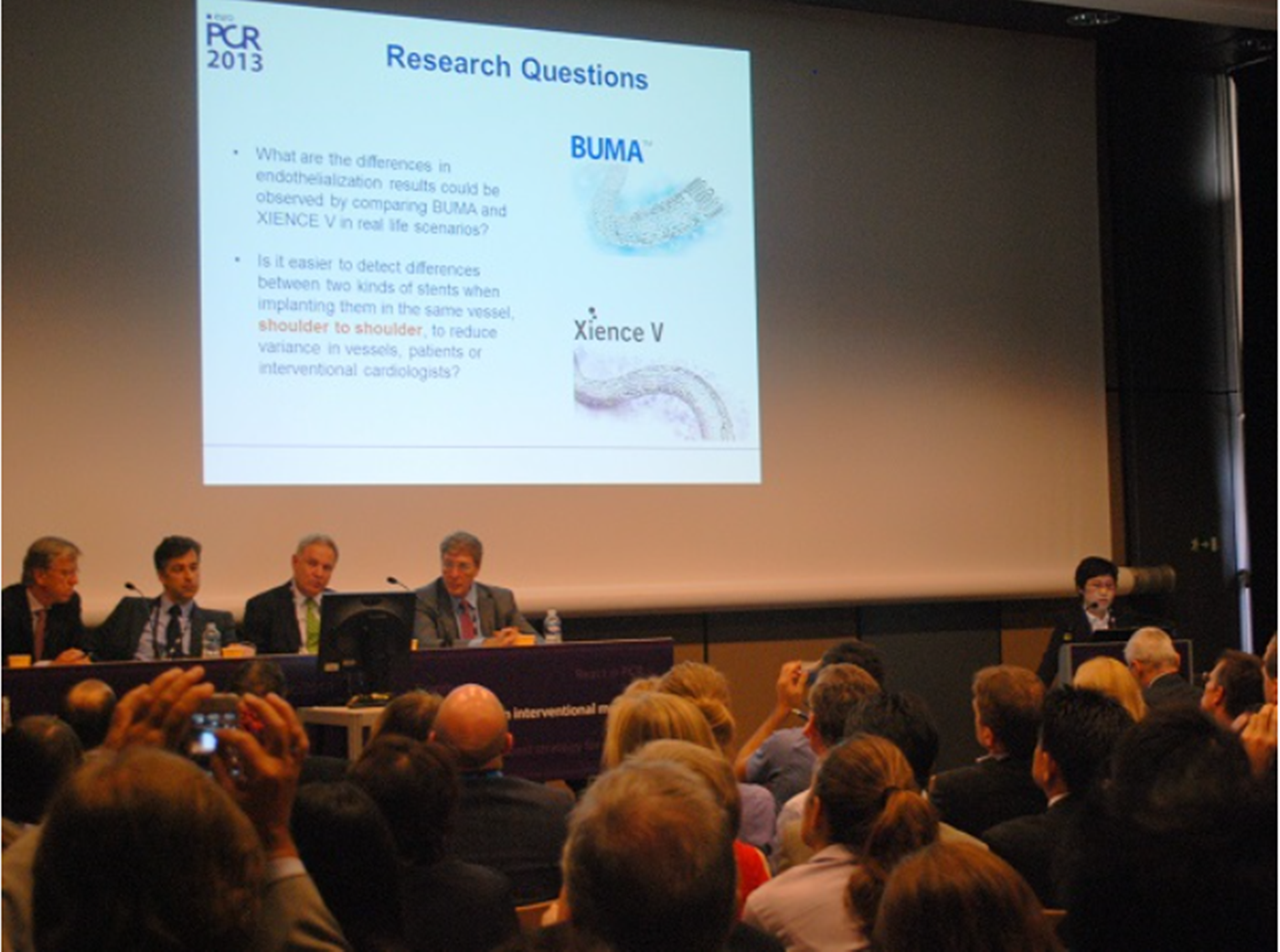 In this year’s EuroPCR, SINOMED attended its first international conference.

On Wednesday, 22 May, Dr. Jingbo Hou from 2nd affiliated hospital of Harbin medical university in China presented in the late-breaking-trials session. It is a recent OCT study comparing BuMA™ to XIENCE V entitled ‘First-in-man & novel DES and scaffolds’, chaired by Dr. S. Verheye from Antwerp Cardiovascular Institute of Middelheim Hospital in Belgium and Dr. R. Waksman from MedStar Heart Institute in Washington.

The objective of this analysis was to observe any difference in two kinds of stents by using the OCT method. Furthermore, it was questioned whether BuMA™ could achieve better endothelial coverage compared to XIENCE V. In this study, BuMA™ and XIENCE V were implanted and overlapped in the same lesion, same vessel of the same patient to optimally reduce blood vessel variances. In total, 20 patients were enrolled in this study. The respondents were evenly divided in each group. Angiography and OCT were taken before and after 3, 6 and 12 months after implantation. The primary endpoint was endothelial coverage at 3 months. The secondary endpoint included endothelial coverage at 12 months, clinical events and clinical follow-up up to 2 years.

The presentation revealed the results of the past 15 months. After 3 months, BuMA™ had reached 95% strut coverage where XIENCE V had reached 94.7%. However, these results were not significant. After a 12 month follow-up, significant results could be found in strut coverage between both DES, respectively for BuMA™ 99.2% and XIENCE V 98.2%. Another interesting finding is that the neointimal thickness for BuMA™ after 12 months is slightly higher than XIENCE V. (0.15±0.10 vs. 0.12±0.56). Dr. Junbo Hou concludes that endothelial healing for BuMA™ is more mature, which reduces the chance of late catch-up problems. When observing the results of malapposition, the outcome for BuMA was 0.1% where XIENCE V had reached 0.5% at 12 months. It was concluded that when observing the strut coverage, neointimal thickness and malapposition, BuMA™ had reached higher and more uniform strut coverage and earlier endothelial healing compared to XIENCE V.